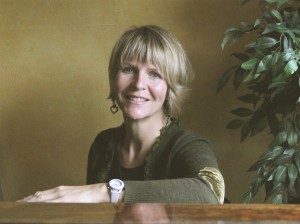 Helen Yeomans is the founder and leader of Glorious Chorus. She writes and/or arranges all the songs that the choir sings and runs workshops around the UK and abroad teaching her award-winning compositions. Helen is also the director of Thula Mama, teaching songs to mothers and babies, and has franchised groups around the UK.
Helen returned to music after a 25 year absence when she had a yearning to sing. To her surprise, she found that not only could she sing but she could write songs too. Writing choral music was the ideal outlet for her creativity, which she could do around all her children, and it was only a matter of time before she formed her own choir. Thus, Glorious Chorus was born.

Glorious Chorus soon gained a reputation for passionate and polished performances which has taken the choir around the country, including performances at Glastonbury festival, The Isle Of Wight Jazz Festival and Port Eliot Festival. The choir was also a finalist at the inaugural Orchestra In A Field Festival amateur choir competition 2012. Glorious Chorus also toured the original One World show created by Helen – a moving and uplifting tapestry of song, spoken word, percussion & choreography, focusing on the crossroads at which the human race presently stands. Helen brought the show to Hull for it’s 2017 UK City of Culture celebrations and has just presented it in London in April & May 2019. In both cases she created a local choir to perform the music.

Helen’s song ‘Awaken’ was chosen as a featured performance piece at 2009’s ‘Sing For Water’ annual fundraiser at London’s South Bank, as part of the Mayor’s Thames Festival. Helen’s songs were also chosen to be performed at the Brighton Fringe Festival in 2008 and 2009. In 2006 Helen’s song ‘Goddess’ was an Honorable Mention Winner at the Unisong International Songwriting Competition. And in 2015 Helen’s song ‘Saved’ won the gospel category prize at the UK Songwriting Contest. She is now in demand for commissioned work and has written a number of pieces for the Hull Freedom Chorus and directed the choir at several festivals in the city. In July 2017 Helen conducted her specially-commissioned new song ‘Sing to the Hills’ at Hull’s Bigger Sing event.

In 2017 Glorious Chorus was selected to sing at the prestigious Voices Now festival at The Roundhouse, London. Now in 2019 the choir has been chosen to perform with Australia’s outstanding male voice choir ‘The Spooky Men’s Chorale.

What sets Helen apart, however, is being able to bring out the best in all singers – from the professional to the absolute beginner. Her ability to infuse groups with her passion and humour is a joy to witness as is her ability to touch her singers with the emotional core of the beautiful songs she has written. Expect tears and laughter, exquisite music, passion and lots of love.

Listen to interview with Helen by Nickomo Clarke

Helen has been announced winner of the gospel/faith prize in this major international songwriting competition with her show-stopping song ‘Saved’. With over 7,000 entries into the competition in total and winners from around the world, Helen is thrilled with this success. You can find details about the event at uksongwritingcontest.co.uk and see the winning song here, performed by Glorious Chorus. Helen was interviewed by BBC Spotlight TV programme about her win and you can see this clip on the Helen’s Story Page.

The choir will be performing the song this summer in it's repertoire. You can buy the score on the Scores Page and the song is also featured on the Love, Peace & Harmony album on the CDs Page.